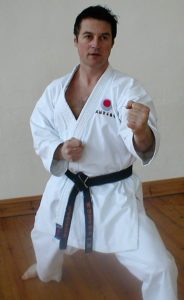 John started his training in karate at the Exeter club in the late 1970’s. At 11 years of age, he began training with Sensei Dave Collacott, the original founder of the club. After gaining his 1st Dan black belt in 1982 and successfully competing in competitions around the country, John was invited to join the national junior squad which took him to the world famous Liverpool Red Triangle club to take part in the famously gruelling KUGB squad training sessions, training alongside KUGB legends such as Sensei Frank Brennan, Ronnie Christopher, Elwyn Hall and George Best to name just a few. Having achieved his 6th Dan in 2021 and being a fully qualified judge and referee at national level, John continues to teach as the senior instructor at the Exeter Karate Club.

Nick has been training in karate in Exeter for more than 30 years.  Nick started training with the club’s founder Dave Collacott and progressed into teaching karate himself. 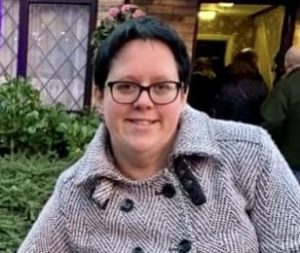 Jenny as well as being a great karate student is also our safeguarding officer at the club. Don’t hesitate to speak to her about any concerns with regards to Safeguarding. As a club we respect and have signed up to the ‘safeguarding code in martial Arts’

Details can be found on the following website:  www.safeguardingcode.com

For any queries or information please contact Jenny on 07834 522388 or email exeterkarate@ gmail.com

Grading is the process of being tested for your next belt colour, representing an increase in the stage of learning karate. These are not carried out by our own instructors. Instead, a senior examiner from the Karate Union of Great Britain examines the students in a formal grading. Exeter Karate Club is lucky enough to be regularly visited by the chief instructor of the KUGB who carries out the grading examination of our students thus ensuring the highest standards of karate progression.